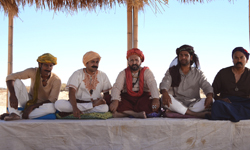 Synopsis: A woman on trial for prostitution turns the tables on her accusers.

Geeta Malik received her M.F.A. from UCLA’s graduate film program in production. She has created several acclaimed narrative short films, including her viral narrative short, “Aunty Gs,” which earned a College Television Award (a “student Emmy”) in comedy production from the Academy of Motion Picture Arts and Sciences. Her narrative thesis film, “Beast,” was funded in part by the Edie and Lew Wasserman Film Production Award. Geeta is a recipient of the Coppel Screenwriting Award and the Jack Nicholson Distinguished Director Award.

Geeta is the founder of Shetani Films, a full-service production company. Her first feature film, “Troublemaker,” premiered at the 2011 Cinequest Film Festival, and was the first feature completed under the Shetani Films banner. Her work has been shown and broadcast worldwide.