The film is a suspense thriller that makes every human being accountable for his or her actions. Using principles of power, chance, information, leverage and randomness, a series of events follow an intercepted diamond heist masterminded by an ordinary man named Roman, who hacks into security protocols of the city of Strathaven, the North American hub for security and prosperity.

2 short will will screening: Ice Cream Wallah, If you love your Children 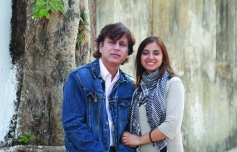 Shreela Chakrabartty and Kash Gauni joined forces to become Shreela & Kash on a motto of faith hope and trust. They only met in person on the set of their first film over halfway through the shoot. Director, Shreela Chakrabartty probes the mind and work of writer/actor Kash Gauni to tell intriguing stories relevant to our times.

Shreela Chakrabartty was born and raised in Edmonton, Alberta. She’s pursued a career in filmmaking after graduating from the University of Alberta. While working in location sound, she produced documentary and short films as a means to hone her craft, following the advice of Werner Herzog, to invest in a pair of hikers and travel. She spent years traveling, filming and studying the lives of ‘real’ people. In 2011 she reconnected with Kash Gauni who had an intriguing commercial story idea… rest is history.

Kash Gauni, works in the Financial sector, retired volunteer fire fighter, storyteller and the ethnic face of large corporations like Scotiabank, Home Depot, and Real Canadian Superstore. He maintained his interest in film and television since his Doordarshan days in India. In what remained of his free time, he penned a collection of stories. Once Upon A Lama, about a schizophrenic’s conversation with the Dalai Lama became the thriller, Rock Paper Dice Enter. His on screen portrayal of Roman keeps you on your seats