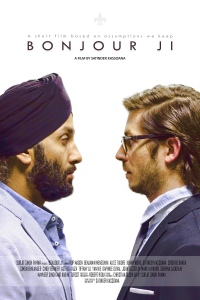 Bonjour Ji is a short film that shows that the assumptions we keep about other races, religions

and cultures decide our interaction with them. Bonjour Ji asserts that our behavior driven by

assumptions is the real reason such assumptions grow and spread. Bonjour Ji revolves around

two characters who feel sidelined by each other’s community. But when they meet, they realize

In short span of my life time, I have traveled as much as a man in my capacity could afford. I was

born in Punjab, India and like my forefathers I probably could have spent my entire life in my

native village, if I wasn’t curious. My first out-of-home experience happened when I went to an

Engineering College in Maharashtra, a state far from my home. Sardar jokes were the first

cultural shock I had. Being a Sikh boy, it did hurt and soon I realized that when people look at

you they look at all the tags you come with. Sikh, Hindu, Muslim, Jatt, Punjabi, Bengali etc.

After 13 years of my stint with Engineering, I have lived in multiple cities of 3 continents and

worked with clients from almost all major ethnicities. Despite of having absolutely no personal

experience of interacting with people from other religions, races and/or countries, I have been

fascinated with how we pre-judge others solely based on those ‘tags’. I have been guilty of this

and I am ashamed of that.

Bonjour Ji is my first short film as a director. I wanted to convey that when we don’t keep any

assumptions; our experiences can be very different from the popular beliefs. Although my film

has a Sikh lead but it’s not a religiously oriented film, neither it is a cultural film. This film is

about a day of two characters, one happens to be Sikh and the other one is French. I chose

these ethnicities because I have seen their social dilemma up close.

Despite of not knowing French, I chose French to be the language of the film. I wanted to stay

close the place where my film happens. I wrote my script in English and then got it translated in

French keeping the context and local dialect in view. It was hard to direct my French actors but I

wanted to explore the film just like my viewers would when they would see the film.

Short bios of cast and crew could be found on http://bonjourthemovie.com/cast-crew/.