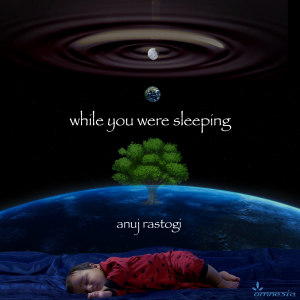 “While You Were Sleeping” is a father’s heartfelt poetic tribute to his baby boy, and hopeful wish for a better tomorrow for our future generations. An avid spoken word artist and writer, “While You Were Sleeping” marks a milestone in Anuj’s musical storytelling, as well as reflecting the realizations about the world around us through the eyes of a father.

“While You Were Sleeping” was written one morning in Toronto, after watching my son sleeping in his crib. I thought about him, and my daughter, and all the things I wish this world would be, and could be, for them. It’s really the simple dream of any father to have their child wake up to a world that is better than the one before them”.

“While You Were Sleeping” features Anuj’s spoken word narration against music composed for the piece. The official video, shot, edited and composited by Anuj, takes you through the journey of a world evolving to a better future as his son sleeps, evoking an ethereal, dream-like state.

Anuj Rastogi is a Toronto based multi-disciplinary artist. As a film composer, music producer, spoken word artist and writer, he has composed and produced for film, studio, and has performed with a number of diverse artists across Canada, the US, the UK and India. As a Spoken Word artist, Anuj uses elements of word play and storyline that thread together broad narratives about social, political, personal and human insights.  Anuj is currently working on a number of projects including a new studio album, a new Spoken Word EP, and two new feature scores in pre-production for 2015 / 2016. Anuj brings a forward a sensitivity that is a unique product of his intuition and environment, and is now adding “filmmaker” to his bucket-list