WHAT COULD POSSIBLY BE WORSE THAN BAD COFFEE?
SYNOPSIS:
Mike and Paul are two mates that meet each day in the park for a coffee and
a break from the daily grind. As they share and discuss the problems they
face in their day to day lives, they miss out on what’s happening in the world
surrounding them. Are they both too self-absorbed to see the world for what it
really is? Or will they find a way to open their eyes and appreciate the lives
they have? 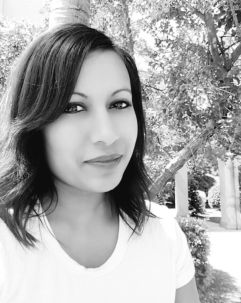 Rachael Belle Myers’ unique zeal for expression found a brilliant and timely
outlet through poetry, screenwriting and more recently as a filmmaker.
Rachael has written a number of screenplays and poetry where damage,
desire and sensory immersion shake the reader out of a complacent slumber
and into a deeper and darker realm of the human experience.
Rachael is the author of “Extracts from my Mind”, “Extracts from my Mind,
The Second Manifest” and “Dilemma”. After collaborating with multiple
filmmakers to bring her spoken word to the screen, Rachael started focusing
on bringing her screenplays to life and began directing and producing short
films.
Jaded Belle Productions was born and Rachael wrote, directed and produced
her first short film titled “Choice” starring Clint Facey and Helen Uskovic. The
dark approach she took to question man’s identity was well received and is a
testament to the many years of scriptwriting under Rachael’s belt.
Following her theme of questioning one’s self, Rachael wrote, directed and
produced another short film titled “First World Problems” starring Joe
Davidson and Clint Facey. The film challenges the audience’s view and
perception of their reality and deals with a number of social issues affecting
our society including homelessness. It has won Best Short Film in the Reel
Time International Online Film Festival, Best Indie Spirit Award in the Sydney
Indie Film Festival and is part of the official selection in a number of other
festivals.
Rachael was born and raised in Sydney, Australia where she still currently
resides.
www.firstworldproblemsfilm.com
www.facebook.com/firstworldproblemsfilm
#firstworldproblemsfilm